Travel to Niger Republic from Nigeria 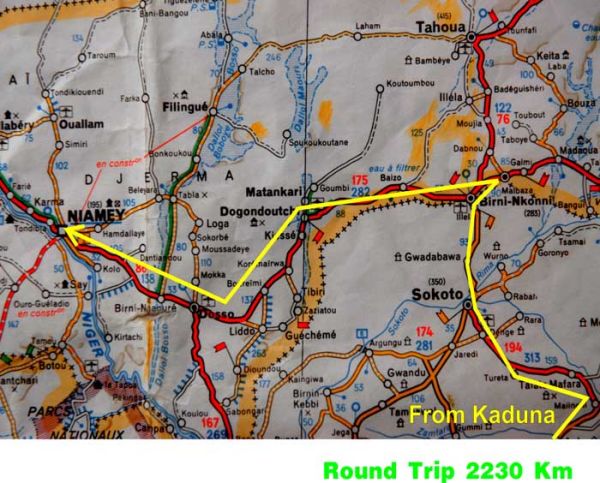 Set off at 6.00 am Kaduna, met Sam Ojo my assistant and driver at 6.09 am, near the new flyover in Kaduna, the weather pleasant and cool, light harmattan in the air.

From Gusau, the road has terrible potholes all over, road continues bad from Gusau to 5km after Anka Junction, then a few potholes to Talata Mafara.

Sokoto is a large town going back thousands of yars, the Leader of Moslems in Nigeria is the Sultan of Sokoto, who onlyweeks ago lost his life in an aircrash near Abuja when a Boeing 737 owned by ADC Airlines crashed shortly after take off in a rain storm, a new Sultan was announced just days after the death of the old one.

Then on to the border, we phoned Mamadou Traoré, the Plant Manager, to tell him we had passed Sokoto and on our way, expect us at border at 1.30 pm.

Nigerian side of border, as usual a lot of paperwork, long forms, ‘list three friends’, and ‘three business associates’, plus a hundred other questions.

We reached to Nigerian Border at 2.20 pm there we met Mossi Maiga, administration Staff of SNC who helped us through immigration, and led us in his jeep to the factory.

Onward to Birnin Konni to buy a plug to fit an extension so that we can convert electrical equipment from the Niger-French to the Nigerian-British system, I dub the adaptor our ‘French Connection’.

Currency we were told CFA to Naira was 3.5 eventually we see that 3.8 is correct in Birnin Konni but in Niamey we later only got 3.6.

The terrain much different from Nigeria lots of flat topped hills, volcanic in origin I was told.

Weather clear and cool in Malbaza after Harmattan in Nigeria, Malbaza a tiny village dominated by the cement factory, and the white limestone dust generated by the factory, but also of course the dominant rock in the area, there is also gypsum which is used in small quantities in the cement, making process, the factory exports quite a lot of this to Nigeria.

Petrol is very expensive in Niger, at 586 cfa per Litre, works out as 167 Naira over twice the price of Nigeria.

We arrived at the Factory at 2.30 met Mamadou Ousmane Traoré, the Plant Manager, we decided to start work right away as the weather was clear and temperature fairly cool.

Using my new toy. The ‘Nikon C200’ was a joy, the large bright viewfinder easy to see. the controls a nice size and it is just the right weight, a little heavy but this makes it steady, with 10.2 million pixels we have no problems with the picture size on a calendar page.

The only problem is with this particular camera is the over saturation even at ‘modest’ saturation, I have to take it down about 10% in Photoshop.

We also shot pictures at the Town’s football stadium named ”Bo Wallendar” Stade de Malbaza, as apparently the “Bo” Swedish MD of SNC has done much to encourage and support football in the town.

Night spent in guest house with French ‘Canal’ Satellite TV channels – which I could not understand. As I have never learned nor cared to learn French.

Spent evening with Corel Bryce on my laptop computer going through tutorials, hope to use Bryce to create animated 737’s for Chanchangi Airline Television advert.

Next morning refreshed and after breakfast of café Olay’ au fromage et pan, we arrived at factory at 7.30 am and spent two hours shooting pictures with our lungs full of dust – but at least it was cool!.

After burning CD’s for the plant manager, borrowing a map of Niamey, changing Naira to CFA at 3.86 to the Naira in the local market we headed out for Niamey at around 11 am.

The road was a bit pot holed to start up with to the first river bed, but improved on up to Dogondoutchie,

We reached Niamey at around 3pm going to the SNC factory but the Marketing Manager had closed. I phoned him from a phone kiosk and he came around right away and suggested some hotels.

We went to his office and the MD ‘Bo’ Wallender arrived and we discussed the calendar, and agreed to meet at sunset on the terrace of the "Grande Hotel" which is the only place to watch sunset in Niamey overlooking the Niger River some 200 metres below us, the view was magnificent!. 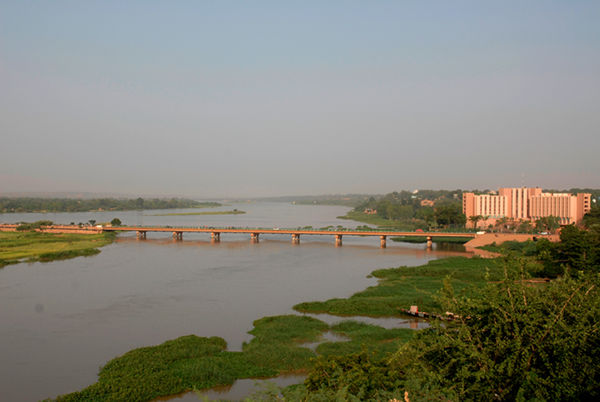 After booking into the Terminus Hotel, because it was priced 20,000 cfa less than the grand at 37,000 cfa,
My finances where a bit low as I had not planned to extend the trip to Niamey 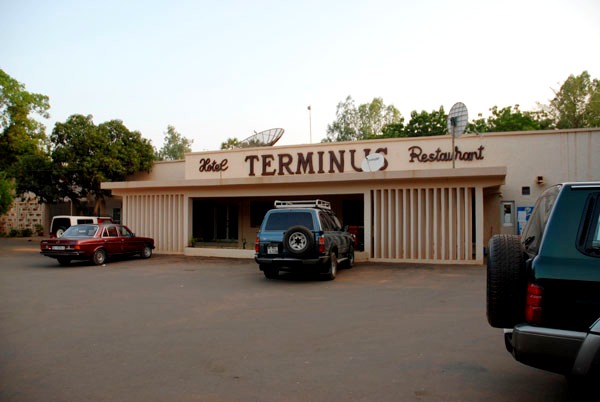 The Terminus is a bit seedy, but clean with AC and satellite TV at least there was CNN (Yukk!) after checking in we met up with Bo Wallender on the terrace of the Grand Hotel and talked a bit about business and things general after which we went out to look for food.

The Chinese was a bit too costly and we wound up with ‘suya’ (Roasted pieces of meat in spices on a stick – popular in Niger and Nigeria) and French bread baguettes, we checked out several local bars and more ‘Flag’ beer at least this time in big bottles at a much better price than the Grande, 576cfa for ‘big bottle’ - at Grande 800 cfa for half size!!

We did not find the La Cochete night club but Sam and I were tired after long day on road, so crashed out, me in room Sam in Nissan Saloon.

Next day we had agreed to meet Salifou at 9.30 to get visa, before that we checked out the Museum, which was quite good despite that the Zoo also inside was full of cages of unhappy animals.

A museum designer attached himself to name of Rasta … and he showed us around the palaeontology museum, where we saw a crocodile fossils 15 meters long!.

The reconstructed dinosaur 8 metres tall in the museum grounds where also impressive!

The rest of the visit was spend getting the visa I should have got before I came to Niger (Next trip will get
Visa first) before leaving we had excellent lunch of chicken and rice with mustard, and a beer at the Marquis Restaurant.

We headed off at 12.30 after Dogon Doutchie we had to divert off the road because of a bridge down, climbing a sand filled hill, but got bogged down after Sam misinterpreted the conditions, fortunately a group of Fulani boys herding their cows showed up, and with their combined efforts we got out of the sand after about 40 mins delay, with no damage. 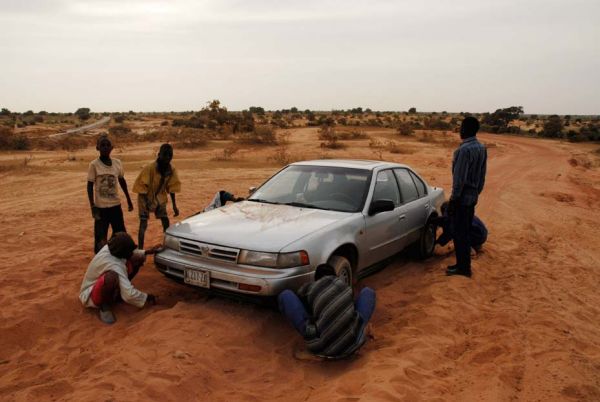 We reached Birnin Konni by 6.15 finally getting through the border posts by 7.00pm and headed down to Sokoto in the dark, reaching Sokoto about 7.30 stayed at the Sokoto Motel for N5,000 a night, very seedy but clean(ish!), no beer as Sokoto is a dry town under Islamic Sharia Law, if I hadn’t been so tired might have gone into the local Nigerian Army camp market (known as the “Mammy Market”) where beer and all kinds of illicit things can be had!. In fact all over Northern Nigeria where Sharia Law is observed the Mammy Markets do a booming trade in beer and licquor sales, as they can’t tell the soldiers they can’t drink.

Sharia Law in my opinion was one of the daftest ideas ever thought of!.

The trip back to Kaduna was uneventful except experiencing a broken suspension spring – no doubt caused by four days on bad roads in Niger and Nigeria.

Next time will take more money and spend more time in Niger, perhaps getting up to Agadez and making a trip to the Air Mountains and the sand dunes.