I and my driver Mohammed left Kaduna for Yankari by road at 6am via Jos and Bauchi.

The slightly longer Southern route to Jos, via Kachia is infinitely better than the direct route via Pambegua, the route is much better and the views, as we approach the Jos Plateau are impressive, especially around Kagoro.

The road into the reserve was still under construction at that time, but quite OK.

We drove finally into “Wikki”camp about 4pm, I managed to get a night in the Presidential Villa due to the contacts of my good friend ” Billy” Tafawa Balawa, who is the grandson of the first Prime Minister of Nigeria, Abubakar Tafawa Balawa, assassinated in 1966; the family still has much influence in the government.

The Camp was full with visiting tourists over the holiday weekend, or rather the remaining habitable chalets of the old buildings, were full, the new South African designed chalets are not yet furnished. 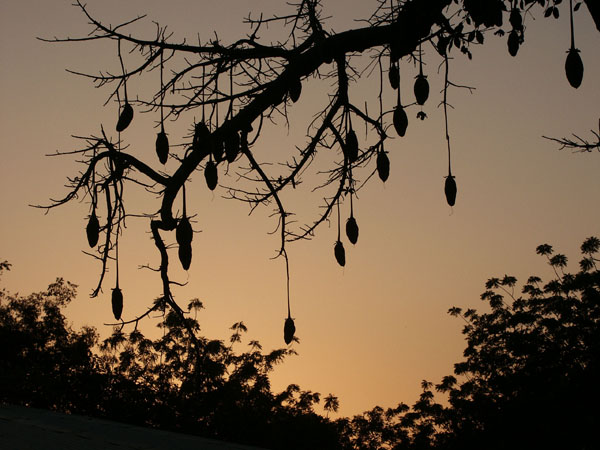 The big difference I could perceive, was the new buildings going up everywhere, visitors centres, villas; this has come about due to the State Government having reclaimed the reserve back from federal government control and having allocated a large part of the state’s revenue into the reserve, with the aim of making Yankari a prime destination for internal and external tourism.

Early next morning, New Years Eve, at 6am with my driver Mohammed we met up with other tourists at the camp safari office.

There was a mixed bunch of tourists, four teenage Nigerian boys and girls, and an older girl of mixed race and a young Lebanese guy.

As the tourist “lorries” were out of commission (broke-down) we hired a four-wheel drive pick-up, this cost 5,000 Naira for the 2-3 hour safari.

Off we set, I opted to climb into the back as I wanted to free access to film and shoot stills, as we entered the reserve, I realised just how cold it was and how little warm clothes I had on - I was frozen!!, with temperature was around 10oC - this was for cold me, my body acclimatized to the tropical heat of Nigeria.


My Game Guides and Film Crew

The trees and grasses where of course sparse and dry this being the middle of the dry season, but also strangely eerie, as the harmattan looked like morning mist, with the rivers and boggy ground, and the guards wrapped in sweaters and kagouls!! - This gave they reserve the appearance of the Norfolk Broads in the UK.

We soon came upon a herd of water buck about 7 females and a male, who munched the grass without concern, as I filmed.

We sighted crocodile gaping on the river banks, also Oribi, Bush Buck, Wart Hogs (who now appear to have overrun Wikki camp) Roan Antelope, we saw no lions, but saw lion tracks, on an earlier trip other tourists saw about ten lions in a group, they also saw elephant which we heard crashing about the bush, but could not see because of the density of the trees.

We visited the game observation hut over a salt lick, but the place was in poor shape and the furniture falling over, not a place you could comfortably spend the hours of sunset or dawn watching the animals. 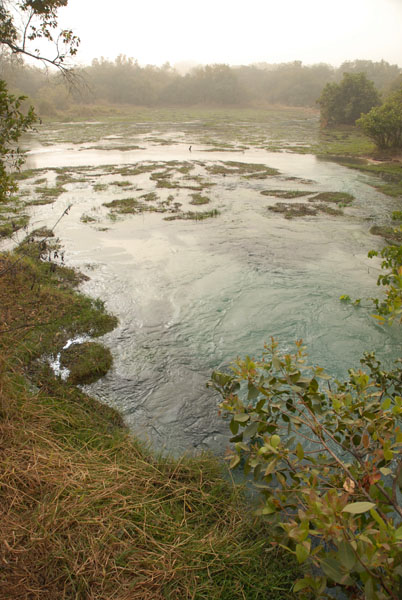 We next paid a visit to Marshall’s caves; these are a string of caves cut or same say eroded out of the limestone cliff face at the sides of the Gaji River where it passes through Barkono Gorge, just 5 kilometres from Wikki Camp.

The caves show signs of once being habituated, probably hundreds of years ago, perhaps only temporarily during periods of attack by outside tribes.

They are also the home of thousands of bats, and also evidently porcupines.

The caves are named after Phil Marshall who was Wildlife Officer here during the 70’s and 80’s, the caves were actually discovered by Phil in 1981


I am very familiar with Yankari, as I used to come to Yankari frequently in the early eighties to film documentaries on Tsetse fly research for the University of Jos, in Plateau State.

Phil Marshall and his wife Nikky, were good friends of myself and the research team, we always made a point of staying with the Marshall’s over the Christmas holiday. 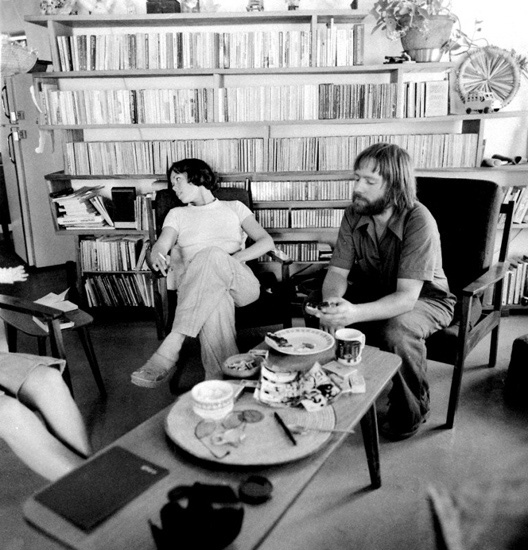 We all brought presents for his young son; I believe his name was...Daniel. We also had to bring a present for another guest at random and the tradition was that the present could not cost more than one Naira (then worth one pound UK).

Memories of the Tsetse research trips with Dr “Bob” Dransfield, Bob Brightwell and others, and how we would get up at 5am, have the first breakfast of water and stale bread from the night before, then at 8am have second breakfast of coffee & rolls in the bush, then at 10 am our third and “best” breakfast in the bush which consisted of ice cold bottles of “Star” beer, scrambled eggs and bacon, fried tomatoes cooked over a kerosene stove. 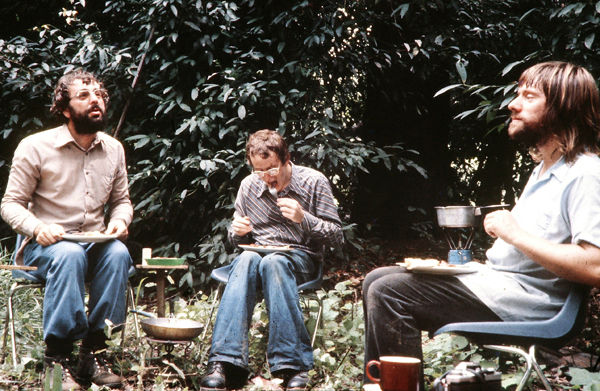 And during this work we would be collecting water from the Gaji river, to fill 20 x 24” photographic trays to which a cocktail of chemicals were added to attract and kill the Tsetse flies, we had to fill and set up about 40 trays around the reserve, as well as collect the samples from the day before and place them in sample tubes for identification in the late afternoon and evening.

We did this morning and afternoon and evening, for three week periods, with barely an hour off for rest at midday, and finishing at around 8-9 pm in the evening after counting and tagging tsetse’s and setting up and packing the Toyota Land Cruiser for the next day.

I was part of the team and filming took place between these activities, by the time we ate dinner frequently at Phil’s house we often all three of use would fall asleep at the dining table and a couple of occasions face down in the meal itself!.

The “Bobs” left “Unijos” in 1982/83, they also were good friends of mine (in a weird way!!) and as far as I know they are still working together in East Africa! - Hey guys where are you now?

I remember the day in June 1980 that Phil sent a message to me at the University, “can I come down to Yankari as soon as possible to take professional photographs of the caves he had just been shown by his game ranger.

Down I went with Dr’s Rosemary Irving-Bell and her colleague and soon to be husband Dr. Derek Roberts and Humphrey Crick (who you can see on the photograph holding a torch) - a researcher at the reserve studying Bee-Eater birds, it was all in black and white Taken on my Mamiya RB67 6 x 7cm format camera as it was intended for publication in a journal. 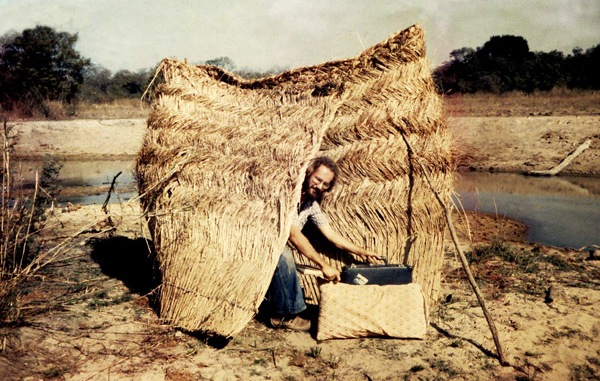 Humphrey in his bird hide

We hacked through the thick bush for about 2 kilometres and waded through the river and through a bog of oozing mud, bitten by millions of mosquitoes who were joined by thousands of tsetse flies; they had a great time on our blood, but we suffered! 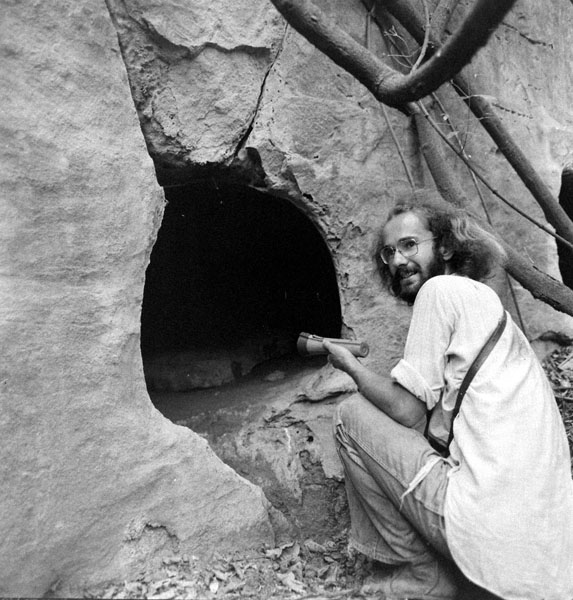 Humphrey Crick at Marshalls Caves 1980, not long after they were discovered 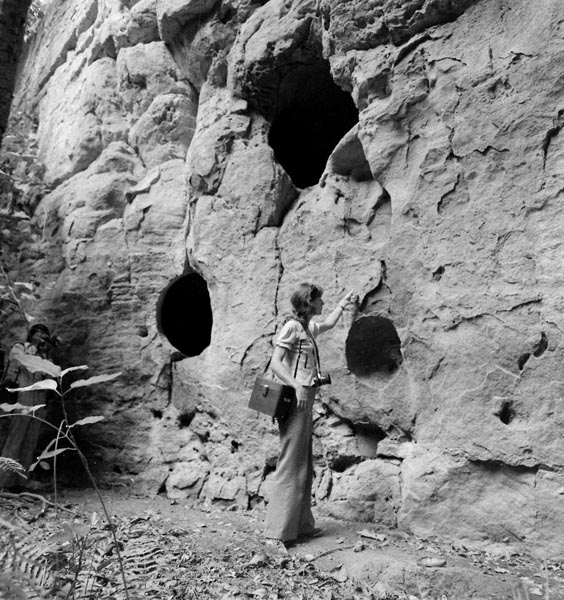 Sadly the caves have been extensively covered by graffiti, by visitors in the twenty years since then, and as far as I know no research has bee carried out either, I did meet in 1986 a Ghanaian Archaeologist and his team who wanted to get permission to arrange a “dig” but they where thwarted by the government regulations and red tape at that time.

Back to the present, the reserve has a great opportunity for development, if the new state government does not abandon the place after a few years!

Yankari is a special place, with a special position in the history of Nigerian Game and forest preservation.

Whatever the form of the planned developments, let them be in tune with the environment, let them be with the protection of the wildlife and flora of the area foremost in the minds of those who are in positions to make or affect decisions.

After the second day in the bush when I hired a vehicle for the day I had the opportunity to spend longer periods at one location waiting for the right shot and the right animal.

Alas the second day was thicker harmattan than the previous so we didn’t get all the shots on video and still that I would have wanted. However I did have a day to contemplate the reserve, my own memories of what it was and what it stands for. And the possible role I might have in its development, only time will tell. 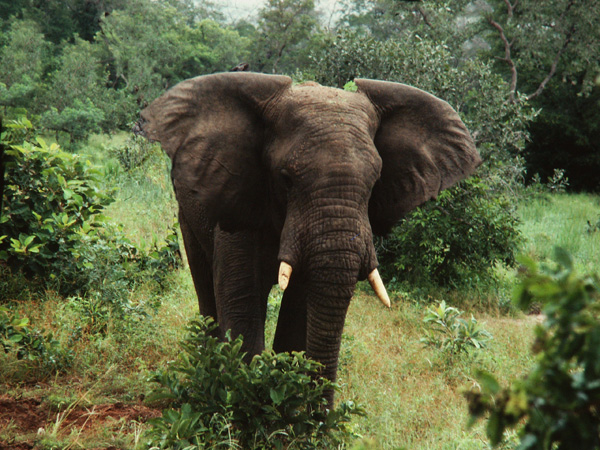 Since I wrote this Phil Marshall Googled my article on this website and managed to contact me, in September 2008.
He confirmed that it was he who had actually discovered the caves, and having checked with Alhaji Jibrin Jia one time Chief Game Warden, who had confirmed that no one had ever seen them before.
Since the Yankari days he come back to Nigeria and worked at Cross River national park, had worked in Botswana, Ghana, Gabon
Next
Previous